Trade Wars are Class Wars: How Rising Inequality Distorts the Global Economy and Threatens International Peace
Author: Matthew C. Klein Michael Pettis
Published by Yale University Press
Year: 2021
Gelber Prize Winner
Trade disputes are usually understood as conflicts between countries with competing national interests, but as Matthew C. Klein and Michael Pettis show, they are often the unexpected result of domestic political choices to serve the interests of the rich at the expense of workers and ordinary retirees. Klein and Pettis trace the origins of today’s trade wars to decisions made by politicians and business leaders in China, Europe, and the United States over the past thirty years. Across the world, the rich have prospered while workers can no longer afford to buy what they produce, have lost their jobs, or have been forced into higher levels of debt. In this thought-provoking challenge to mainstream views, the authors provide a cohesive narrative that shows how the class wars of rising inequality are a threat to the global economy and international peace—and what we can do about it.

“Matthew Klein and Michael Pettis tell the gripping story of how economic policies have generated inequality both within and between states and created global tensions and political polarization. Trade Wars are Class Wars combines political and economic analysis with sharp history to argue that domestic policies that advantage the rich at the expense of workers produce not only strife at home but also deepen international rivalries.  This book speaks powerfully and directly to one of the biggest challenges of our times.” 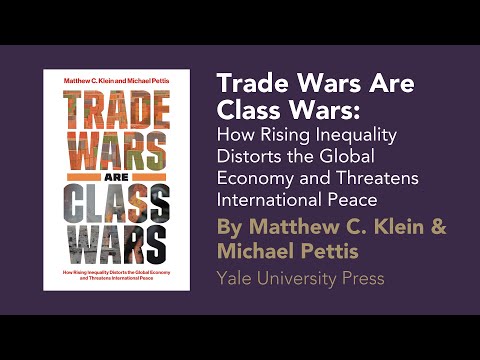