Twilight of Democracy: The Seductive Lure of Authoritarianism

Twilight of Democracy: The Seductive Lure of Authoritarianism
Author: Anne Applebaum
Published by Signal/McClelland Stewart
Year: 2021
Shortlisted
Applebaum explains, with electrifying clarity, why elites in democracies around the world are turning toward nationalism and authoritarianism. From the United States and Britain to continental Europe and beyond, liberal democracy is under siege, while authoritarianism is on the rise. In Twilight of Democracy, Anne Applebaum, an award-winning historian of Soviet atrocities who was one of the first American journalists to raise an alarm about antidemocratic trends in the West, explains the lure of nationalism and autocracy. In this captivating essay, she contends that political systems with radically simple beliefs are inherently appealing, especially when they benefit the loyal to the exclusion of everyone else. Despotic leaders do not rule alone; they rely on political allies, bureaucrats, and media figures to pave their way and support their rule. The authoritarian and nationalist parties that have arisen within modern democracies offer new paths to wealth or power for their adherents. Applebaum describes many of the new advocates of illiberalism in countries around the world, showing how they use conspiracy theory, political polarization, social media, and even nostalgia to change their societies. Elegantly written and urgently argued, Twilight of Democracy is a brilliant dissection of a world-shaking shift and a stirring glimpse of the road back to democratic values.

“In the 1980s, young activists across Central Europe fought for democracy. Today, some of these activists continue to fight for democracy, while others have become authoritarian leaders or propagandists intent on destroying the institutions they once helped to build. In this engrossing meditation, Anne Applebaum paints an intimate portrait of those who have turned their back on democratic values. This is riveting, if scary, reading for anyone who wants to understand what is going on in countries from Poland to the United States.” 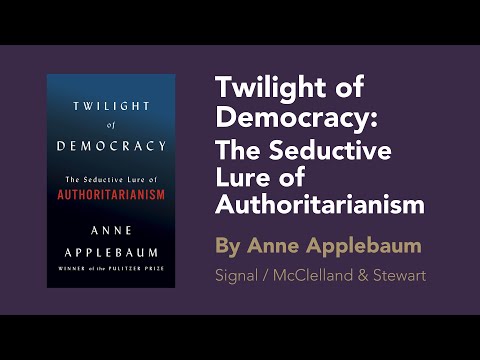