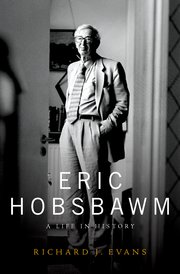 By the time of his death in 2012, Eric Hobsbawm was the most widely read historian in the world. His books were translated into over 50 languages. They sold a million copies in Brazil alone.

His influence on the discipline of history was immense. But he was not just a writer: he was also present at some of the key moments of twentieth-century history, from the Nazi seizure of power in Berlin and the election of the Popular Front in France to the crisis of international communism in 1956 and the rise of New Labour in Britain in the 1980s. In this lecture, drawing on his recently published biography, Sir Richard J Evans explored Eric Hobsbawm's life and deals with some of the controversies it has aroused.

Sir Richard J. Evans is Provost of Gresham College, London, and Regius Professor Emeritus of History at the University of Cambridge. He is the author of numerous books on modern German and European history, including The Coming of the Third Reich, The Third Reich in Power and The Third Reich at War. He was the principal expert witness in the libel action brought against Deborah Lipstadt in 2000, recently the subject of the movie, Denial.

Gresham College and University of Cambridge