Professors Lilia Topouzova and Joshua Arthurs come from very different areas of study. While they are both professors of History, Dr. Topouzova’s research explores Eastern European communism and especially the forced labour camps of communist Bulgaria and Dr. Arthurs specializes in historical fascism and the history of modern Italy. What unites the two, however, is an interest in memory, its politics and the way it shapes our understanding of history. Since Dr. Arthurs’ arrival at the University of Toronto, the two realized that while their regions of research may not seem to relate, there was much more overlap in their work than initially met the eye.

Their work on history and memory led to many discussions, specifically about the everyday lived experiences of authoritarianism. “We saw that we were each looking at the same questions but in different regions. But we were very much united by these themes,” said Dr. Lilia Topouzova.

Both professors were sure to emphasize that authoritarianism is often studied without consideration for the effects this kind of regime has on the ordinary person. The study of history is not just about authoritarian personalities or the existence of tragedies under such a system, but what happens afterward and how that impacts the lives of people who experienced it. This is not to remove focus from the heinous crimes of dictatorships. The unignorable brutality of authoritarian regimes is well-documented and should not be forgotten. But the structures constructed that intervene in daily life, the quotidian humiliations and traumas, and the moral compromises these conditions force people to make is another enduring legacy of authoritarian regimes.

So how does one take stock of all this? How can we flip our understanding from the macro to the micro perspective in order to account for the historical memory of the everyday and trace the thread of how we arrive at contemporary narratives and politics? Topouzova and Arthurs initially thought about framing these questions around the resurgence of right-wing populism in Europe. Dr. Joshua Arthurs then discussed how that idea evolved,

“One of the big things that’s not discussed enough when we talk about the resurgence of authoritarian politics is the stakes that that has for ordinary people.”

This shared curiosity developed into an idea for a project. In August 2021, the two began the long process of their successful application for a Connection Grant, a funding initiative through the Social Sciences and Humanities Research Council (SSHRC). Their project, Authoritarianism—Lives, Legacies & Traumas is a workshop that endeavours to stimulate interdisciplinary conversation, engage with other perspectives, and reassess authoritarianism through the lives of ordinary people. Although authoritarianism has had different manifestations throughout history, Dr. Topouzova says the experience of authoritarianism is united by these themes; lives, legacies, and traumas. She also shared the importance of the workshop’s goal as a comparativist opportunity.

The workshop will host experts on North Africa, Myanmar, Turkey, Ukraine, Argentina—a wide range of countries from the European space and beyond. Important to the professors was the multiplicity of participants, who are a mixture of emerging and senior scholars from all over the world. The workshop aims to provide an opportunity for people from various fields of work by asking, for example, “How can we put a political scientist of contemporary Myanmar in conversation with a historian of fascism and a Bulgarian artist, and in turn, the public?” For that conversation, they have brought to the table political scientists, anthropologists, filmmakers, and archivists, just to name a few of the broad perspectives that will be engaging in this workshop. Both professors noted a sense of excitement and possibility for this type of comparative work. They are hopeful that it will be a chance for scholars to learn from one another, develop a new common vocabulary for this type of study, as well as reach a broader audience and hone a critical perspective on the present.

Their success in receiving the Connection Grant is in no small part due to their hard work and many hours put into the application process. Following their initial conversations in August of 2021, they began the grant application by pitching their project to various stakeholders within the University of Toronto. As Dr. Arthurs put it, “It takes money to get money.” In order to be funded by the Connection Grant, you have to prove there is internal interest in your project and that you have support from your institution. The application received the generous support of CERES, several academic units, the Office of the Vice President for Research-International, and the University of Toronto Press.

The process did not stop there, however, and after several months of intensive Googling and citation chasing in search of participants, a deep dive into both professors’ academic backgrounds, down to the smallest details of the proposed caterer, the application was finished and returned with extremely positive results. Not only were Drs. Topouzova and Arthurs awarded this Connection Grant, they were able to secure funding through SSHRC’s Special Response Fund for Trainees (Ukraine) which will allow them to include Ukrainian postdoctoral researcher Oleksandr Melnyk as a part of the event.

While a massive undertaking, the grant was only step one. The workshop (step two) is projected for September 28-29, 2023 and will involve the participation of some undergraduate and graduate students and hopefully can evolve to include public-facing elements such as an installation that conveys scholarly ideas in non-conventional ways. Both professors hope that the conversation this workshop generates can develop through other ways of communication. 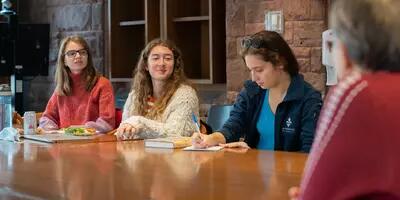 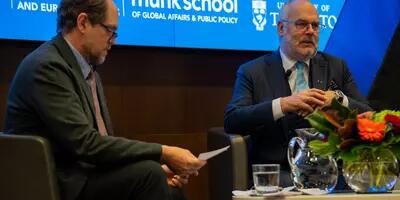