This is an in-person event at the Campbell Conference Facility, Munk School, 1 Devonshire Place, Toronto, Ontario.

On January 26, Author Margaret MacMillan joined Paul Wells in conversation as she examined current events from the perspective of a leading historian.

MacMillan’s books include War: How Conflict Shaped Us, The Uses and Abuses of History and Paris 1919. She knows how history has described previous eras of war, plague and great-power conflict. She brought this perspective to today’s multi-dimensional turbulence.

This event was part of a week of live podcast tapings for The Paul Wells Show. The Paul Wells Show is produced by Antica Productions in partnership with the Munk School of Global Affairs & Public Policy and the National Arts Centre. The founding sponsor is TELUS. The title sponsor is Compass Rose. Its publishing partners are The Toronto Star and iPolitics.

Listen to the conversation here. 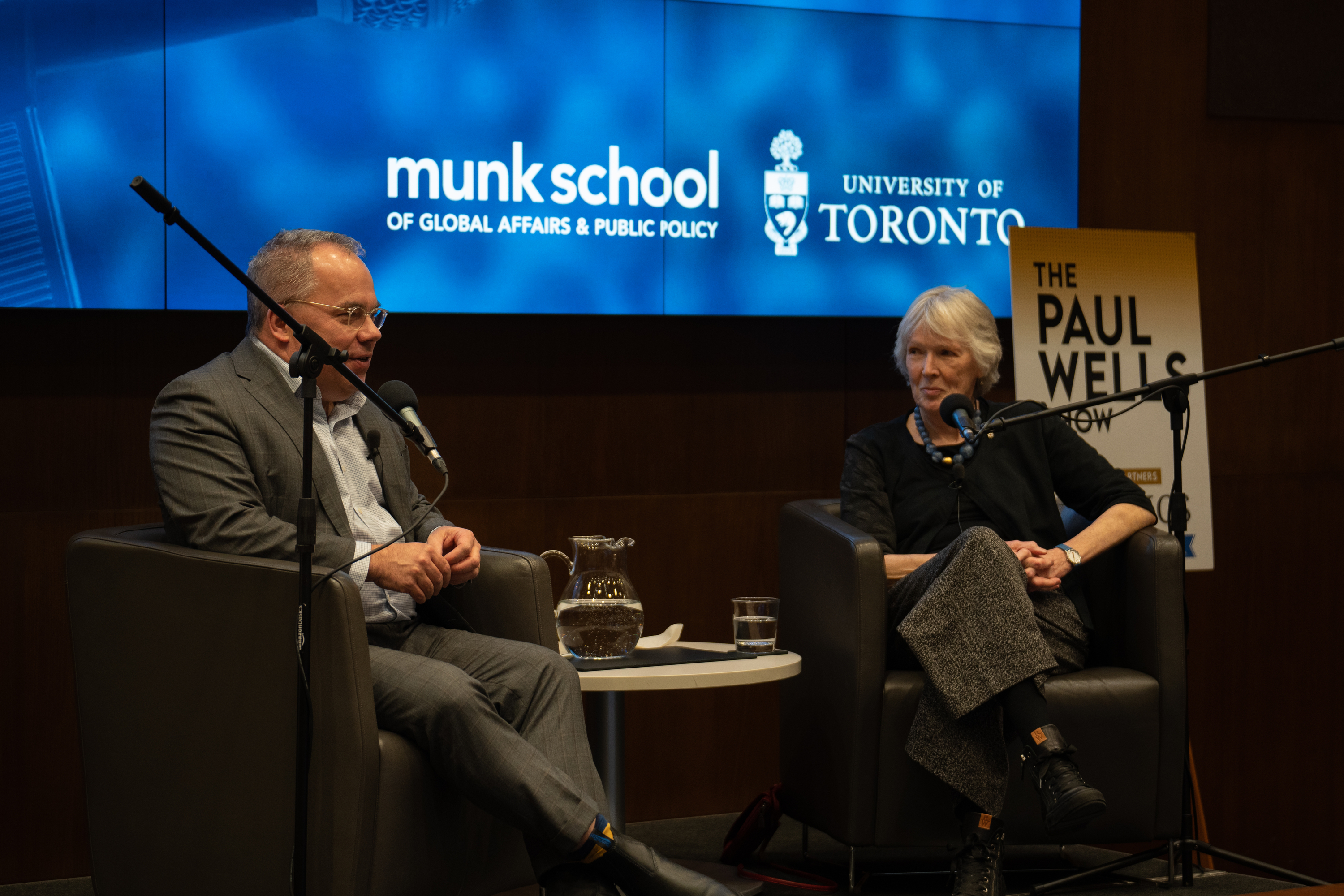 Margaret MacMillan (Toronto and Oxford) is a professor of History at the University of Toronto and an emeritus professor of International History at Oxford University. She was Provost of Trinity College, Toronto from 2002-7 and Warden of St Antony’s College, Oxford from 2007-2017. She is currently a trustee of the Imperial War Museum. Her research specializes in British imperial history and the international history of the 19th and 20th centuries. Publications include War: How Conflict Shaped Us, Paris, 1919, and The War that Ended Peace. She gave the CBC’s Massey lectures in 2015 and the BBC’s Reith Lectures in 2018. Awards include the Samuel Johnson prize for non-fiction and the Governor-General’s literary award. She has honorary degrees from several universities and is an honorary Fellow of the British Academy. She is also a Companion of the Order of Canada and a Order of Merit and Companion of Honour (UK).

Paul Wells is one of Canada’s leading political journalists, having spent more than 25 years on the Hill, covering eight federal elections, four prime ministers, and a big piece of Canada’s history. Fresh, funny, and authoritative, Wells speaks in both official languages on all matters of the day, from the nation’s position in the global economy, to the inside scoop on what’s really happening inside the Parliament buildings and beyond.

For 19 years, Wells was the lead political columnist at Maclean’s magazine. Prior to this, he was the national affairs columnist at The Toronto Star and has also written for the Globe and Mail and The National Post. Wells has won three gold National Magazine Awards and a National Newspaper Award.

Today, Wells is a regular political commentator on both the French- and English-language CBC networks. He has also launched a subscription newsletter, which is already one of the most widely read political newsletters in Canada. In fall 2022, Wells will launch his podcast, The Paul Wells Show, in partnership with the Munk School of Global Affairs and Public Policy at the University of Toronto. He is also their inaugural journalist fellow-in-residence for the 2022-23 academic year.

A bestselling author, The New Yorker magazine called Wells “Canada’s foremost Harperologist” with the release of his book on Stephen Harper, The Longer I’m Prime Minister. It is the only book to have ever won three major non-fiction book awards: The Shaughnessy Cohen Prize, the John W. Dafoe Book Prize, and the Ottawa Book Award.